This post is for someone who probably had a question to God regarding the tree of knowing good and evil and the attitude of the first people. It is quite possible that such a question was recently asked to God by a young woman in a blue sweater or blouse who liked the color blue. Probably dark-skinned with long, dark, straight hair.

Today I received such a picture. 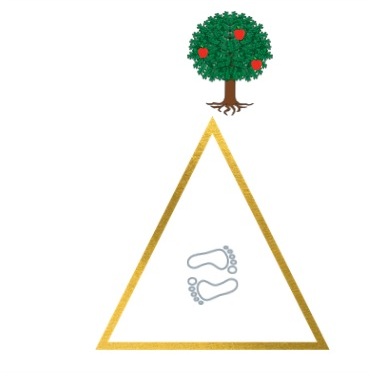 God showed me a tree with good fruit to eat. And the triangle – a clearly measured surface, one end of which was very close to the tree. In the triangle, in the place furthest from the tree was a human foot directed to the right – and the other, directed to the left. I knew that the first of these feet belonged to Adam, and the second – to Eve. The arrangement of the feet showed that one of them was looking to the right and the other to the left – and it was good, it was meant to be. 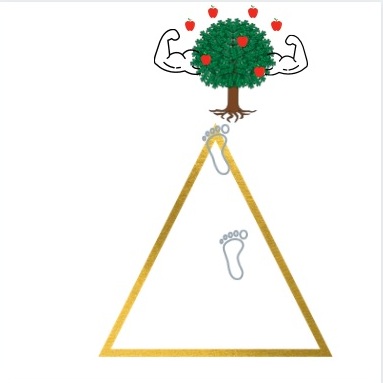 And suddenly two muscular arms appeared in the middle of the tree, which began to juggle the fruit of the tree, as if encouraging to try (because they give real strength?).

All this tumult around the tree draws the attention of people – the first foot that turned toward the tree belonged to Adam; he still stood in the same place and watched.
It wasn’t long before Eve’s foot was just near the edge of the triangle and a split second later, she stepped outside the protective triangle. Immediately she fell with those muscular arms sticking out of the tree, which did not let her go, but hugged her like ivy. 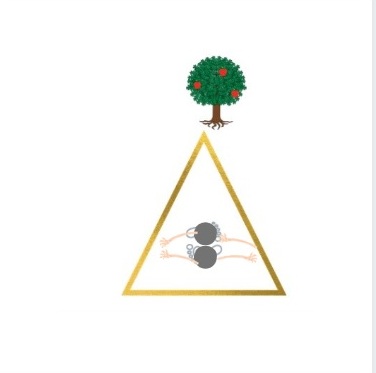 And I saw a bird’s eye view – until Eve did not cross the triangle, she was fused with Adam – it shows their heads and shoulders joined together – these form the eye of God = God’s providence in which they lived from the beginning of creation.

Eve, directing her steps towards the tree, at the same time came out of God’s providence, ceased to be part of His eye! She began to see the world in her own way.

No. She was in exactly the same position as the piece of paper sunk into the shredder; she left the safe triangle she was creating with Adam and God.

Why didn’t God have mercy on her?

Eve brought chaos into God’s order. God, by creating us and the world in a certain way, at the same time let us know that certain laws are immutable in it and that thanks to this we can feel safe – for example, without fear that walking the street suddenly start to rise up, and planting a tree – that it will start to grow crown down. Man was to build wisdom according to God’s laws and was to feel safe in every sphere and easily be able to discern the state of things.
Going further: no such situation could arise that a person suddenly starts to call what is good – evil and vice versa – and he just learned evil. Eve had to go outside the garden, which ended just behind the ill-fated tree, because God also did not intend to change the supreme law – take away man’s free will.

This is the end and at the same time the beginning. Eve was intercepted by the ivy’s arms and had to leave the other side of the tree – where the land was not so fertile, and the further Eve went, the more and more cracked the earth. Finally, Ewa began to sink – she no longer had a life-jacket, she took it off thinking that it would be more comfortable for her, that she didn’t need it, because there is no rain.

When she got into the deep water, she began to sink, she could not easily go back for life-jacket – it remained in the area of the triangle. But Jesus appeared – He went beyond the triangle, wearing a life-jacket. He decided to leave the safe area and go where only someone with a human body has the right – a body that life-jacket fits on. And He rushed to help Eve, and then me and You.

If that was the word for you, let me know in the comment below the post or on the Fanpage.